TOP THINGS TO SEE (AND TASTE) IN TURIN

Capital of the Piedmont region, boasting an ethereal and refined charm, Turin is one of the most versatile and elegant cities of Italy.

Respectful of traditions though constantly evolving, this city guards the treasures of its own past in a contemporary, creative, and forward-thinking atmosphere. An important hub of cinematography and automotive industries, Turin sets itself apart from other Italian cities thanks to its casual yet regal attitude.

The vibrant nightlife of the city center, with its many clubs and bars, has given a new impulse to the place that historically housed the Italian royal family. 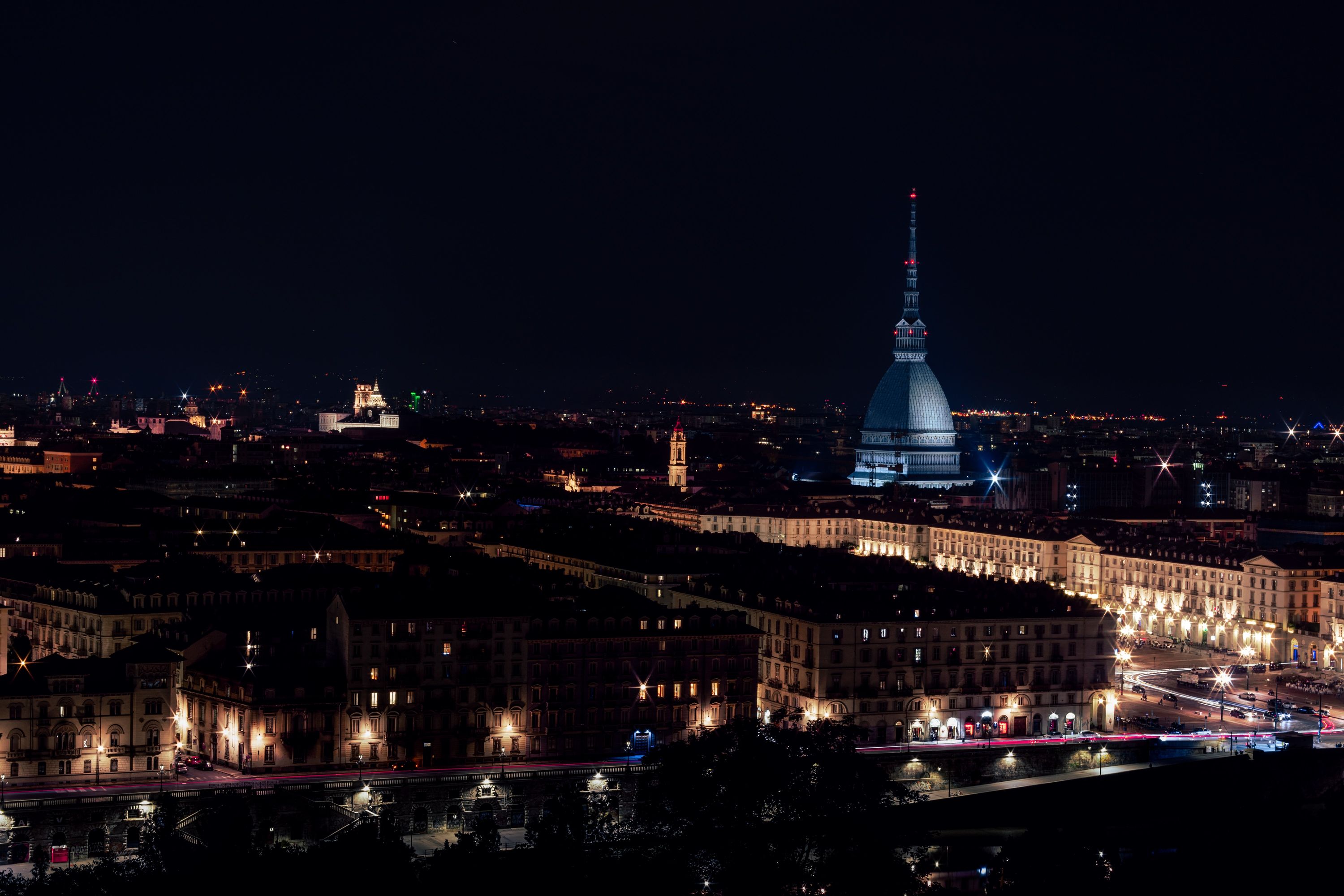 The imposing buildings and villas where kings and noblemen resided stand majestically in the city’s streets. Piazza Castello with Palazzo Reale, Palazzo Madama and Palazzo Carignano are the starting point of an ideal route to visit and live the city in all its glory. At the same time, buildings such as the Basilica of Superga, the Gran Madre, the Venaria Reale and Stupinigi palaces, the Duomo and the Consolata, tell the story of Turin and represent some of the most beautiful works of famous architects like Juvarra or Guarini.  In a chapel of the Duomo, which caught fire in 1997 and now is completely restored, the Sacra Sindone – the burial shroud in which supposedly Jesus Christ was wrapped after the crucifixion – is kept.

Thanks to the heritage of the Savoy, the former Italian Royal family, Turin boasts important and precious treasures such as the Royal Palace, with its collection of weapons, jewels, tapestries and furniture. In the Royal Library, one of the most famous drawing of the world is preserved: Leonardo da Vinci’s self-portrait in red chalk.

Are you planning to visit Turin and do not know where to start your journey from? Here are the top attractions in Turin you definitely cannot miss:

WHAT TO SEE IN TURIN

The Mole Antonelliana is one of the most famous landmarks in Turin, and it has become the city’s icon since its construction. This building, with its 167,5 meters of height, has been acknowledged as one of most beautiful monuments of Italy and the highest masonry structure in Europe. It owes its name to Alessandro Antonelli, the architect who projected it in 1863. The panoramic elevator, built in 1961 for the 100th anniversary of Italy’s unification, allows to get to the small temple positioned above the cupola, at 85 meters high. From there, it is possible to overlook and admire the whole city.

In 1996 the building was restored and became home to the National Museum of Cinema. The museum, which is one of the most visited in Italy, hosts several multimedial and interactive stations, rare pre-cinematographic optical devices, materials and equipment from Italian and international film sets, as well as an extended collection of movies, books, prints, boards, posters, paintings and photographs. CHAPEL OF THE HOLY SHROUD

The chapel was built in the 17th century on commission from the Duke Carlo Emanuele I of Savoy, to conserve the precious Sacra Sindone (Holy Shroud), which the noble family had been guarding for centuries.

Reopened in September 2018 after a long restoration, the Chapel of the Holy Shroud is one of Turin’s major highlights. The baroque masterpiece by Guarino Guarini, declared UNESCO world heritage in 1997, is a jewel waiting to be discovered thanks to its black marble with a tinge of grey, the beautiful arcs and pillars, the games of light, the statues, and the bronzy capitals with the symbols of the Passion.

Turin has a real green heart, which its citizens enjoy all year round: the Valentino Park. This notable area, which spreads along the banks of the Po River, not only provides a park for local people and tourists to enjoy the fresh air, cycle paths and outdoor walks, but is also a place where culture and nature meet. This park particularly stands out for its natural heritage, since it boasts a rich and diverse flora.

The origins of Valentino Park date back to the second half of the 17th century, when the city of Turin experienced a new and intense phase of urbanization. Today, this park distinguishes itself also for the presence of the marvelous Medieval Hamlet, which was set up to pay homage to the ancient historical and cultural traditions of Piedmont and its surroundings. 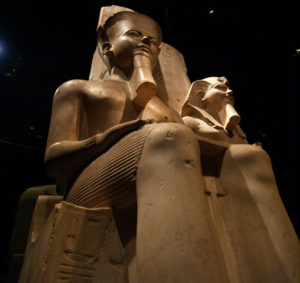 The Egyptian Museum of Turin is known worldwide for its extensive collection of antiquities, which is by far the most significant outside of Egypt. The Museum is found within the Academy of Science’s Palace, the imposing building whose construction started in 1679 by architect Michelangelo Garove, based on the original project of Guarino Guarini. Today the Museum showcases about 6.500 artifacts, while over 26.000 are stored in the warehouse. The objects on display result both from private collections and archaeological excavations in Egypt, carried out between 1900 and 1935. The collection covers a period that goes from the Paleolithic to the Coptic era, the age of the first native Cristian Egyptians.

In 2018 the Museum registered nearly 850.000 visitors, which makes it the 8th most visited museum in Italy.

The majestic basilica stands on the Superga hill, located northeast of Turin. It has always been considered a ‘celebrative monument’ since it was built by Vittorio Emanuele II of Savoy as an offering to the Virgin Mary, following the victory over the French. From the height of the Superga hill, the square in front of the basilica offers a spectacular panoramic view of Turin.

The Basilica of Superga is also infamous for the accident in which the whole Torino football team lost their life: in 1949 the team’s plane, which was transporting all the players, the trainer and the staff, crashed against the Basilica’s massive wall, leaving no survivors.

Palazzo Madama is located in Piazza Castello, right in the heart of Turin. Part of UNESCO world heritage, it is one of the most representative buildings in Piedmont and it also hosts the Civic Museum of Ancient Art. Historic café in the center of Turin

The Royal Museums are one of the major attractions of Turin. They spread over an area of 3,000 square meters and allow the visitor to follow a route through Turin’s and Italy’s history. They are comprised of: Royal Armory, Royal Library, Royal Palace, Sabauda Gallery, Archaeological Museum, Royal Gardens and Chiablese Palace.

The Sanctuary of Consolata, also known as Church of Saint Mary of Consolation, it is a fascinating building dating back to the Paleochristian era, and today is one of the main places of worship in Turin.  The Church was designed in Romanic style, however during the 18th century it went through several changes that radically transformed its architecture, turning it into a baroque church. The Sanctuary of Consolata’s bell tower is indeed not to be missed, as it was built in the 11th century and it is the only part that remains of the ancient Romanic church.

One of the most peculiar features of Turin is the presence of many 19th century cafés, where it is possible to taste all the typical delicacies of the city. One of the most famous is Caffè Bicerin, historic café where the eponymous drink was invented; the Bicerin’s delicious recipe includes coffee, hot chocolate and milk cream. All historic cafés are places of charm and elegance where visitors are taken back in time, even for just a few hours.

WHAT TO EAT IN TURIN

The bagna càuda is a sauce made of unsalted and boneless anchovies and garlic, melted in boiling oil. The sauce is served in heated bowls, in order to keep it the right temperature throughout the meal. It can also be used to dip raw and cooked vegetables, such as cardoon, Jerusalem artichoke, peppers, cabbage and more.

The bagnèt verd is a green sauce whose ingredients are anchovies and garlic melted in boiling oil with plenty of parsley, breadcrumb soaked in vinegar and raw extra-virgin olive oil. It is used to season stewed meat and tomino, a small and round typical cheese which is heated on the grill to soften its core.

The vitel tonné is made of thin slices of roast beef, served cold and seasoned with a sauce made from mayonnaise and finely chopped canned tuna. 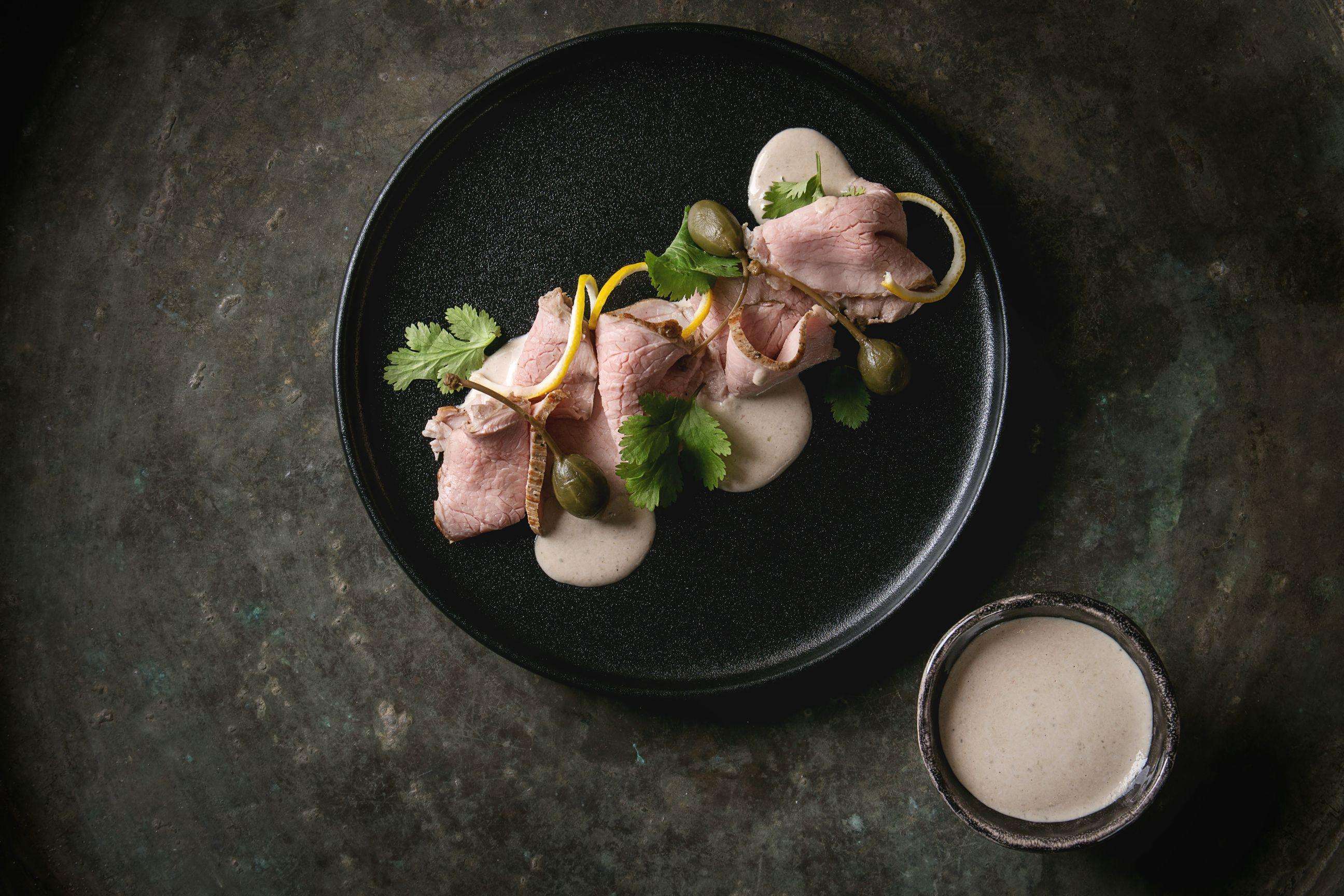 The agnolotti are a typical fresh egg pasta, rigorously hand-made and very similar to rectangular ravioli. They are filled with cooked meat and vegetables and seasoned with roast meat gravy.

The tajarin are small ‘tagliatelle’ (flat spaghetti) made of hand-made egg pasta, which can be dressed with roast meat gravy, stir-fried with butter and sage or white truffle flakes, or covered with ragù (Bolognese auce). In a less common recipe, they are center stage in a soup with chickpeas and other pulses. 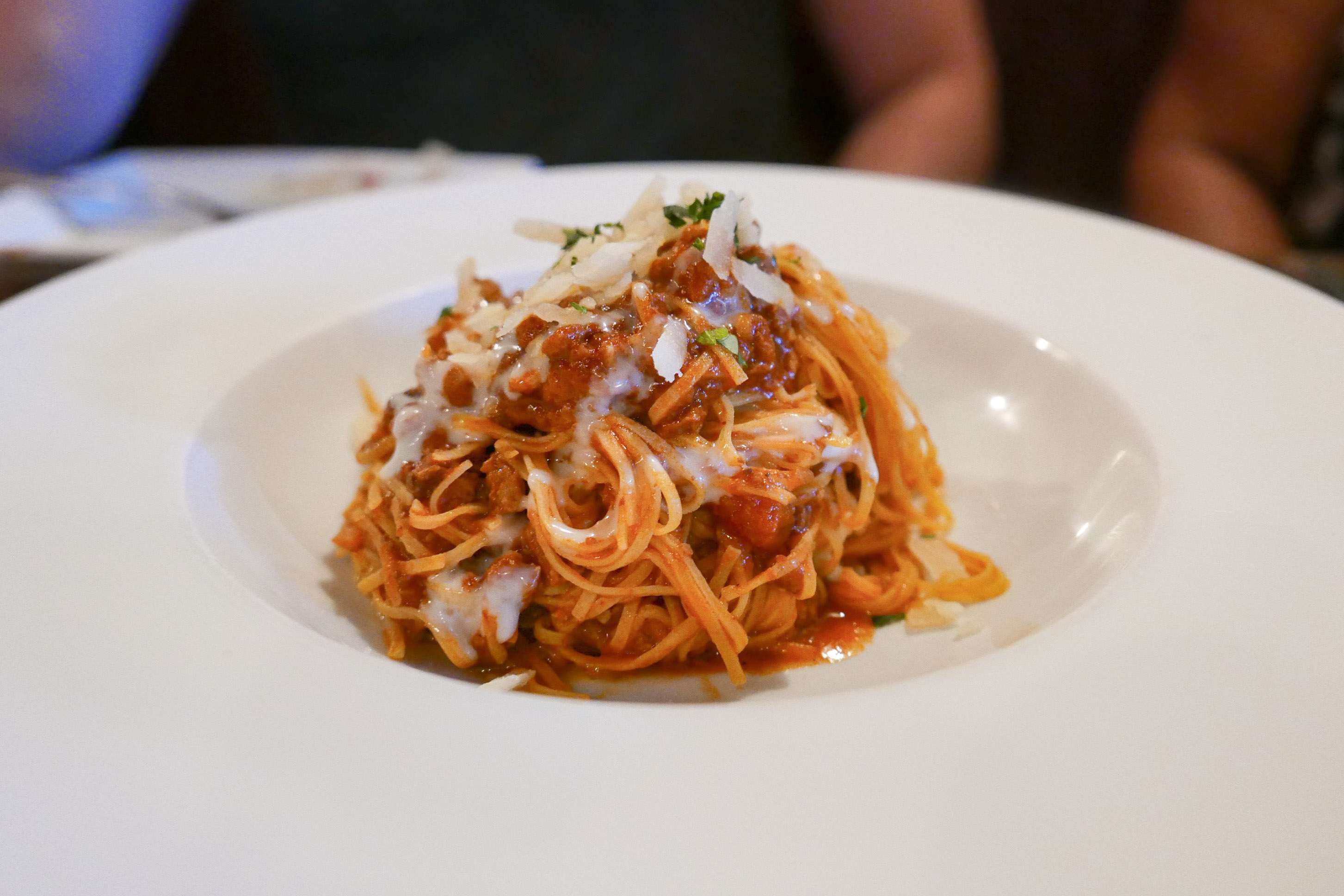 Different cuts of beef meat boiled with carrots, potatoes, onions and celery, then served warm or cold with bagnèt verd or bagnèt ross (sauce based on tomato and onion) and grape jam.

Crests and wattles of rooster, chicken liver, floured beef slices, veal offal: the whole thing is cooked with butter and Marsala wine along with mushrooms, pickles and peas.

This is a fry-up with meat, vegetables, mushrooms, fruit and sweet semolina. The mix of salty and sweet ingredients is peculiar and addictive.

Fassone (local beef breed) meat marinated in Barolo wine for at least 8 days along with aromatic herbs. The marinade and prolonged cooking soften the meat and allow it to fully absorb the wine fragrances.

The bonet is a typical pudding made of eggs, sugar, milk, cocoa, Fernet (herbal liqueur) and amaretto biscuits. Best served well chilled. There is also a Gianduja (sweet chocolate spread) version, a must for gourmands.

If you want to learn how to prepare these dishes and discover many more Italian recipes, have a look at our cooking courses in English. 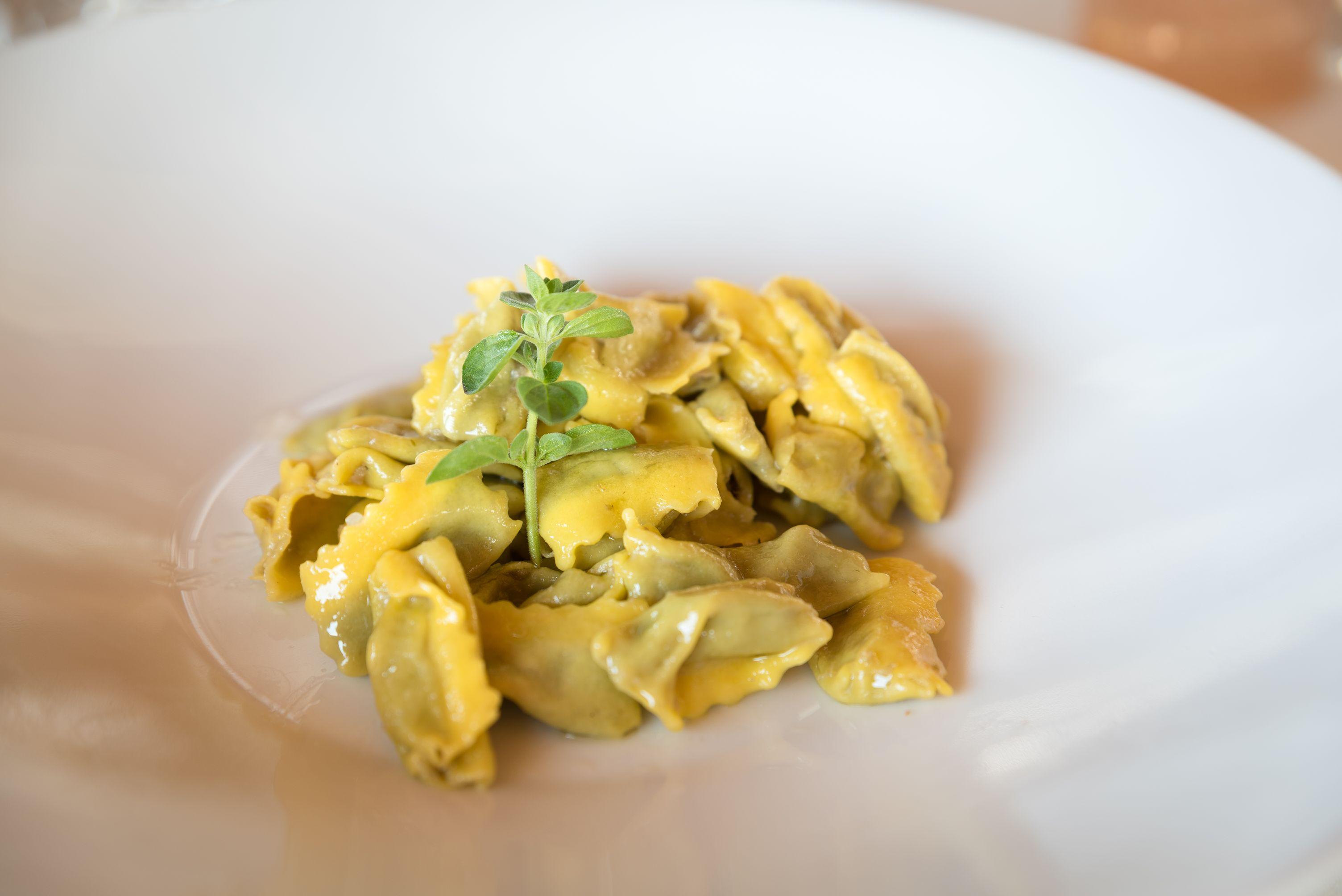